Shaders are a simple way to modify the way Minecraft renders its lighting and shadows to create any number of effects for the end user, typically used to improve the overall look of the game. Ensure sure you have a powerful system before attempting to run Shaders as it will impact performance greatly. Installing Optifine 1.12 and above. (Required for Shaders)First, ensure you have java downloaded and installed on your system, get java here Next, we download Optifine, download the latest Optifine for your version here Upon running the Optifine installer you'll want to select your Minecraft install directory, it should have the correct default directory already entered, so don't modify this if you haven't changed yours. Click "Install" button in the installer, this will begin the installation process. 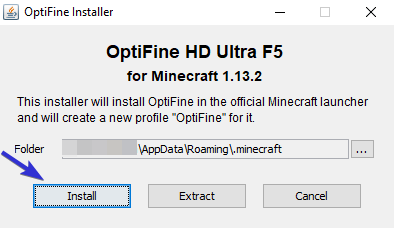 Next, open up your Minecraft launcher, you should now see that an Optifine profile has been selected and is ready to load, if not, make sure to close and reopen the launcher or go back to the previous steps and try again.

Once this is selected, launch it, let the game get to the main menu, now, if you check your video settings you'll see a bunch of new options that come with Optifine, one of those being "Shaders..."You've now installed Optifine. Installing Shaders.With Optifine installed, you can now download your desired shader as we're almost ready to install it.If you're unsure what shader to use, you could try Continuum, SEUS, Sildurs or many others out there, those are just the common ones. With the Shader downloaded, you'll now want to click on the "Shaders..." button inside of video settings, then click the "Shaders Folder" button, this will open a directory. Drag and drop the Shader you downloaded into this directory, you can now select it in the Shaders menu in-game.You've now installed Optifine and Shaders. If your version of Minecraft does not support Optifine you'll want to look at using the Shadersmod, but we will not be covering the installation of that due to it no longer being maintained. With installing to a modded install, the process changes slightly Installing Optifine/Shaders on a modded Minecraft install.We start by first downloading the latest Optifine preview for our Modded Minecraft version, let's once again go the Optifine site but instead of downloading the latest normal version, first click at the top "Preview versions" and if your version is listed, download that, otherwise, download the latest non-preview version. Now that you have that downloaded, instead of running the installer, we'll want to just drag and drop this .jar into our client "Mods" folder, no need to install on the server for this. With that, follow the above steps to get your Shader installed.You've now installed Shaders on a Modded Minecraft instance.

Was this article helpful?